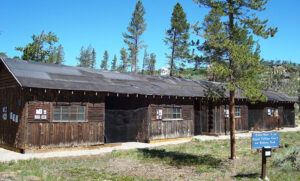 In about 1915, the first “motel” in Grand Lake was built. Called the Smith Eslick Cottage Court, it is thought by historians to be a rare example of a motor court, a lodging specifically designed for the automobile tourist and his car. The Cottage Court has been restored to its original condition and is now an unusual museum featuring hundreds of items, photos, and stories of early automobile tourism. It is the centerpiece of the Cottage Camp, a growing historic and community events site.

In 2008 the fate of the Cottage Court was in jeopardy. It sat on land owned by the Rocky Mountain Repertory Theatre and faced demolition to make way for construction of a new theater. The Grand Lake Area Historical Society (GLAHS), true to its mission to preserve, protect, and promote history in the area, embarked on a major effort to preserve and restore the structure. A nearby lot (still on the old original road into town) was  purchased for placement of the building while additional funds were raised for an adjoining lot. The total of one acre will allow for optimal placement of the Cottage Court with room for creation of the Grand Lake History Park.  The Court was restored with early motel furnishings, and a park environment will recreate the original wooded setting.  This is expected to be a one-of-a-kind educational experience for visitors with an opportunity to pause for a picnic, just as early Cottage Court guests must have done.

The Grand Lake Area Historical Society has been working continually since 2009 to fully activate the Cottage Camp as a unique reflection of Grand Lake’s remarkable history, and to realize its potential as an important asset to the town and its visitors. The generous support of our Grand Lake community and grantors has already accomplished a lot; a brief list of what’s already been done is below. There’s still more to come. 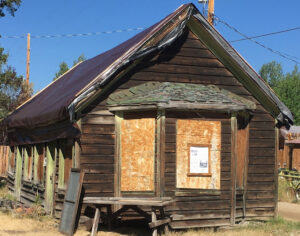 The humble building with the bay window just next to the Cottage Court was the Eslick Store and Office (ESO), part of the original Smith Eslick auto-tourist lodging business as the visitor check-in and small mercantile. The Historical Society intends to restore and rehabilitate this building as the Welcome Center and tour guides base at the site. It will be integral to the development of property just west of the Cottage Court as a community events area with amenities like a fire pit, picnic area, small stage and more. We’re looking forward to being able to host all sorts of history events and fun activities year-round when we have completed the entire project.

For more information on this project click here.
Use the Donate button to make a donation online directly to the Smith Eslick Cottage Camp project. Enter the Donation Amount and the total will be updated to reflect your donation total. You can then use the “Continue” button under the section titled “Don’t have a PayPal account?” or you can log into your PayPal account. All major credit cards are accepted, as well as PayPal funds, and payments are safe and secure through PayPal.  Our EIN number is 84-6105634.

The Smith-Eslick family built their Cottage Camp right on the old road into Town. The road wound past the present Daven Haven, turned into the present Vine Street and onto Grand Avenue. There the Cottage Court, the Eslick Store and Office and other small cabins sat among the trees, offering a pleasant setting for travelers. 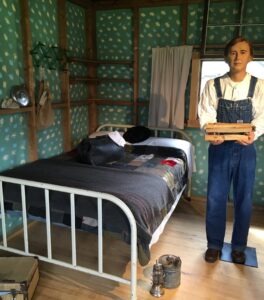 Room at the Court

This was an overnight accommodation for automobile travelers, i.e. an early “motel” in today’s terms. This also explains the four cabins separated by open “car ports”, all joined by a common roof. The patterned, bark slabbing typifies the exteriors of many old buildings in Grand Lake. Even more amazing is the fact that history experts from the National Trust for Historic Preservation and the Colorado Historical Society believe that the Cottage Court is probably the oldest original motel structure in the United States. This is quite a distinction!

The historical significance of the Cottage Court lies in its relationship to automobile tourism and economic vitality in a remote mountain community. Grand Lake Village, situated on the largest natural lake in Colorado and surrounded by majestic peaks of Rocky Mountain National Park and the Never Summer Range is in a pocket of stunning natural beauty. First found by Ute Indians and then hunter/trappers in the 1870s, a mining boom in the 1880s brought enough commercial activity to establish the Village. However, the advent of the automobile in the early 1900s defined tourism and recreation for the masses as the economic engine that would drive the community then as well as now. 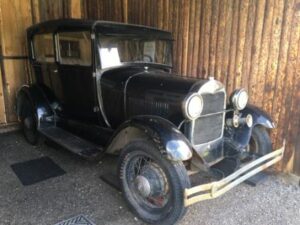 The Smith – Eslick Cottage Court is named for three generations of the same family who built the structure around 1915 and operated the business into the mid-20th century. P.H. Smith was a sawmill owner/operator, skilled in construction, and a hotelier and land owner. The Cottage Court was built on land owned by Smith, and his experience accommodating hotel guests prepared his daughter, Georgia, and her husband, Alfred Eslick, to operate the Cottage Court. Clyde Eslick, a grandson of Smith, married Grace Stroebel, and the couple continued operating the business and contributing to the community in a variety of ways. Each Cottage Court room included a bed, fold-down table, chair and wood stove. The addition of the Eslick Store and Office in 1933, built by the youngest Smith grandson, Loren, was another convenience. This was a step-up over more primitive auto camps to which travelers carried all their own supplies.

In the early 20th century the chance to drive a personal car through majestic high mountain scenery and wildlife habitat, plus being able to find affordable, comfortable overnight accommodations were new and exciting. Wearing a cowboy hat and boots “out on the frontier” might afford a chance to see a real cowboy or Indian! The Cottage Court and others like it prospered. The Village of Grand Lake prospered. This was the beginning of the auto tourism industry that even today supports all mountain communities like Grand Lake which are rich in scenic attractions and recreational opportunities. The simple Smith – Eslick structure has survived essentially unchanged for almost 95 years as a tangible reminder of how earlier generations might have vacationed.

2009 GLAHS purchases property at 729 Lake Avenue, along Vine Street, diagonally across from original location, another Eslick Family property, also along the “old road” into Grand Lake

2022   Work to fund rehabilitation of the ESO Welcome Center, including public bathroom, continues.

Sources:
Rocky Mountain National Park, Pictorial History, by Kenneth Jessen, 2008.
The Playground Trail, The National Park-to-Park Highway: To and Through the National Parks of the West, by Lee and Jane Whitely, 2003
Archives of the Grand Lake Area Historical Society