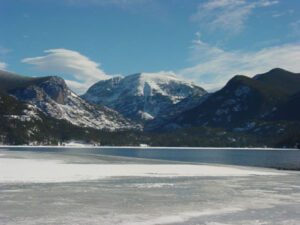 A map and description with pictures can be printed so that you can learn about the history of our village.

Welcome to Grand Lake!  This small community lies along the west border of Rocky Mountain National Park (RMNP).  Ute and Arapaho Indians summered here long before it was ‘discovered’ by explorers, trappers, prospectors, and tourists.

Grand Lake is the largest natural body of water in Colorado; it measures 265 feet at its deepest point.  The lake was formed thousands of years ago by glacial action.  Heavy masses of ice crept down the slopes of the mountains to the north and east, gouging into the underlying rock.  As the climate warmed, the ice melted, leaving behind ridges of silt and rocks, called moraines.  One moraine blocks the west end of the lake and others are evident as the long, low hills in and around town.

The rounded granite peak at the east end of the lake is officially named Mount Craig but is often referred to as Mt. Baldy.  Across the lake is Shadow Mountain.  Both of these mountains are within the boundaries of RMNP.

Two creeks flow into the lake, the North and East Inlets.  The stream that flows out to the west is often considered the headwaters of the Colorado River; until 1921, it was known as the Grand River.  There are several natural sandy beaches around the lake.  You are standing on the northern shore, near the largest of the beaches.

The Yacht Club was formed in 1902 by a handful of

families who had summer homes on the lakeshore.  In August, during Regatta Week, Yacht Club mem-bers compete for a variety of cups, including one donated by Sir Thomas Lipton.  Only a few boats competed during the first few years, and for good reason!  Imagine hauling a sailboat on a freight wagon over Berthoud Pass, which at that time was a rough, rutted dirt road.

Lake Homes.  Notice the homes that encircle the lake; some of them were built more than a hundred years ago.  To build homes on the southeast shore, materials were hauled across the frozen lake in the winter.  For years, many of these homes were used only during the summer.  Grand Lake’s population has always been much larger in the summer than it is in the winter.

If you are short of breath, that may be because you just climbed a moraine.  This house, on its rock base, was built as a summer home.  For 100 years, it has belonged to the Owen family.  This is not unusual; many homes in the area have been in the same family for four or more generations.

Across the road to the west is one of the large granite boulders that was deposited by the glaciers.

During the early 1900s, visitors could stay in one of several small hotels, set up a tent, or rent a small cabin.  Residents built rental cabins such as these around their homes to supplement their incomes.  The street side of these cabins was altered when the buildings were used for retail shops.  Walk around back to see how the cabins looked in the 1930s. Lodgepole pine slabs were used to finish the exterior of these, and other, buildings around town.

This tumbling creek is fed by snow beds in RMNP.  It is one of the two creeks that flow into Grand Lake.  In times past it was used as a water source and to generate electricity.  On a summer evening, you may see bats swooping above the water in search of mosquitoes and other insects.

The original owner of this property had a small saw-mill and could mill his own lumber.  The main house was used for religious services until the Catholic church was built.  Adjacent closets were even fitted with a metal screen for use as a confessional.

The Rapids was one of the first hotels in the area to have running water, electricity, and heat, all of which were produced by a water-powered generator on the North Inlet.  Note the use of lodgepole pines for both structure and design.

This was the site of Grand Lake’s first hotel, the Waldron House.  In 1919 it was torn down to make way for the Pine Cone Inn.  As implied by the name, cones from lodgepole pines were used to trim the fur-nishings.  Here, bands played while couples danced across polished floors.  The original Pine Cone Inn burned and was rebuilt in the mid 1940s.  All but the west end of the building was torn down in 1986.  The big round fireplace still stands in the restaurant.

Except for a few years when it was the Rockin’ K, this has been called The Lariat.  Signs from businesses that have closed decorate the walls and ceiling.  It is currently closed.

The NE corner of Grand and Pitkin was the location of the Courthouse and Jail when Grand Lake was the County Seat (1881-1888).  After the county offices moved to Hot Sulphur Springs, the jail was used as an icehouse, and the courthouse was used for various purposes including a restaurant, a grocery store, and a saloon.  In 1936 or ‘37, the small building was torn down to make way for the larger building you see today. If you walk around back, you’ll see that lodge-pole slab siding was used on this building, too.

The original Grand Lake townsite consisted of forty-four blocks, one of which was set aside as a public square.  Here, in the early 1900s, the community held annual fish fries, which evolved into the Buffalo Barbecue that takes place in July.  The Community House ** was built in 1922 .  It was used for public gatherings, holiday celebrations, a movie theatre, and stage productions.  Today it houses the Town Hall and is used for community events.

On the ridge to the NW are the green-roofed build-ings that make up Grand Lake Lodge * (built in 1920).  East of the long roofs of the lodge and terrace, you can see the roofs of some of the rental cabins.

Although remodeled and winterized, this building has a long history.  In 1905, half of the building was the school (with five pupils); the other half was the office of the first forest ranger.  It also served as Grand Lake’s first telephone exchange.

Harry Harbison opened his general store in 1906.  Upstairs he kept toys for children to play with while their mothers shopped.  Prior to construction of the Community House, the second floor was also used for public gatherings — dances, holiday parties, and other celebrations.  The owner has been restoring the exterior of this handsome building.      West of the Harbison store was an icehouse where people bought blocks of ice for their iceboxes. The ice was cut from the lake and covered with sawdust to keep it frozen.  The current building dates to the 1970s, but it looks much like the former icehouse.

A large boulder and a jumble of smaller rocks are visible in the moraine that supports a summer home.  An ambitious resident dug back into the moraine and then used the rocks to build the first level of the building.

As you walk along Vine St, you are following the original road between Grand Lake and Granby. In the late 1930s, the road was relocated to make way for Shadow Mtn. Reservoir. Now we take Grand Ave west to hwy 34 and the road is above the reservoirs.

This early “motel” was built to accommodate the new type of tourists – those who arrived by private auto.  Note the use of lodgepole slab siding in its construction.  The building was purchased by the Historical Society and moved from its original location where the theater now stands.

This old-style gate doesn’t require any hardware.  Look for examples of old fence designs around town.

Once P.H. Smith’s carpenter shop, this building was converted to a home.  For several years, it was a café—next to the stables that fronted on Grand Ave.

Many small buildings once occupied this block.  One-by-one they have been replaced or extensively remodeled.  This one-story building is the only one that still has slab siding.  Originally a grocery store, it was a souvenir shop for over a half century.

The boardwalks were originally built by shop owners as a courtesy to customers; the boardwalks also helped to keep the floors somewhat cleaner.  Today, they add to the town’s rustic flavor.

Although it has changed hands and had many names, this building still resembles the original tavern.  The Wiswall brothers who built the tavern were skilled photographers. One of them gave piano lessons. This mountain community, isolated in the winter, de-pended on its citizens for entertainment, so a music teacher was welcomed with enthusiasm.

For a few years, Grand Lake had three miniature golf courses; this is the only one that remains.  It was designed by a creative architect who enjoyed imagining and constructing the many motorized obstacles.  In 1973, this course received the Golden Hammer Award from Mechanix Illustrated.

James Cairns started a mercantile on this site during the gold rush of 1881; his was the first building to be erected after the town site was surveyed and platted.  Cairns replaced his first store in 1908 with a larger one.  In 1924, he sold to Matilda G. Humphrey, who enlarged the building.  In the back of the store is a rustic soda fountain, now used to display merchan-dice.  Cairns’ wife, Mary Lyons Cairns, wrote a history of the town, which is still in print.

When Grand Lake was the county seat (1881-1888), this was the County Clerk’s office.  It was a small, one-story building; now it has a second and third story additions.  Originally, the building was located around the corner on Grand Ave.  Frame buildings were frequently moved and old logs reused.  There were few if any utility connections, so this was much easier to do than it would be today.

Note the peeled log construction of this small hotel.  Even the young trees used to cover the chinking were peeled.  In 1973, the Historical Society purchased the building.  It has been restored and is now operated as a museum.  Take a few minutes to visit this hotel and experience the life of a tourist in the early 1900s.

View From The Porch — The Water in the Lake

In the 1930s, the valley south of Grand Lake was ac-quired by the U.S. government for the Colorado-Big Thompson project, which allows for the storage and transfer of water to the east slope of the Rocky Mountains.