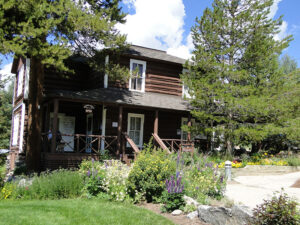 The Kauffman House Museum was built in 1892 and operated as a hotel until 1946 by the Kauffman family. It is the only remaining log hotel built in Grand Lake prior to the 1900’s. As a nonprofit organization, the Grand Lake Area Historical Society operates and maintains the historic building as a museum. A gallery was added in 1990 to house additional exhibits which change periodically.

Museum Hours of Operation:
The Kauffman House Museum is open daily from Memorial Day through August 11:00 am to 5:00 pm, Weekends in September and on special occasions throughout the year. Volunteers are docents and tour guides at the museum and will share the area history and information about our collections.

>> Virtual Tour of the Museum

The museum is operated entirely by volunteers.  Docents and Tour Guides are scheduled for a three hour shift weekly from 11 am – 2 pm and 2 pm to 5 pm daily throughout the summer and from 1 pm – 4 pm during special events.  If you have an interest in this history of the Grand Lake area and enjoy meeting people who visit from nearly all of the 50 states and more than 20 foreign countries each year, place contact us and offer your services. 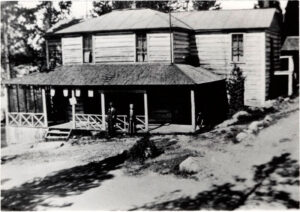 Kauffman House History
The Kauffman House is an excellent example of an early residence and tourist hotel. It was built in 1892 by Ezra Kauffman and was run as a hotel continuously until his death in 1920. It was operated as a summer tourist hotel by Ezra’s widow and daughters until World War II and then sold to Henry Rhone in 1946. The Rhones used the hotel to house guests and people who worked for them in their guest house and restaurant business. The house had several other owners until 1973 when the Grand Lake Area Historical purchased the house and restored it as a museum.

This hotel, the only remaining log hotel built in Grand Lake prior to 1900, is listed in the National Register of Historic Places because of its log architecture and because its first owner was a typical example of the men who joined the westward movement, drawn by the mining, trapping, fishing and tourist phase of the Grand Lake community and Grand County, Colorado.

Wallpaper Project
The Grand Lake Area Historical Society received grants to fund the reproduction of wallpaper for the parlor and the application of it. Following a study by Architects Long-Hoeft of Georgetown which identified the wall coverings and paints used throughout the life of the Kauffman House Hotel, the board selected the parlor for a restoration project. Using a photograph of Ruth and Rosemary Kauffman in the parlor from appoximately 1915, the wallpaper in the picture was selected for reproduction. It was the fifth layer of paper on the wall. When uncovering the wallboard in the parlor we discovered that paper in the room.

An upstairs bedroom, Mrs. Putman’s room, also had wallpaper reproduced like the original. Stop in to see the results of this project.