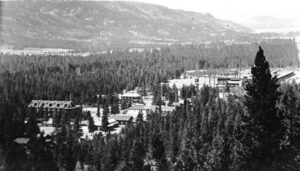 Once upon a time on the land that lies beneath Lake Granby and Shadow Mountain Lake there were ranches, pastures and an almost forgotten town, Monarch. It is a story that goes back 100 years to the Summer of 1905, and the arrival of train service in Middle Park and promoters who were “honest men, but too visionary and lacking in experience”, according to Frank H. Wolcott, a brother of one of the founders.

The Monarch Consolidated Gold and Copper Mining and Smelting Company owned the King and Queen copper mines on Arapahoe Range above the South Fork of the Colorado River. They felt their assays indicated ore worthy of a mill and arranged to haul in the heavy machinery and proceeded to build a town with cottages, a small hotel, stores, a bowling alley, theater and dance hall where Arapahoe Bay is today.  By 1907 Monarch had a school and post office. However, records indicate only about $150 worth of copper per year was ever produced.

Soon the promoters realized a sawmill was needed to provide both timber and cash to support the mine operation.  A dam was built creating Monarch Lake at the junction of Arapahoe Creek and the South Fork of the Colorado, and a canal was built to float logs cut near Strawberry Lake to Monarch Lake. A stern wheel steamer bunted rafts of logs into flumes and canals toward the sawmill downstream in Monarch.

In the spring of 1906, Monarch management obtained a charter to build the Rocky Mountain Railway, a standard gauge, for lumber and passengers, from the Moffat tracks in Granby to Grand Lake, with a spur over an unspecified pass to Walden in North Park. The track was laid following the river from Granby to the sawmill, by Japanese and eastern European laborers. Ranchers along the route, excepting Fred and Frank Selak, quietly granted rights-of-way. The only rolling stock owned by the railroad was a small, ancient locomotive and a caboose. The night before Thanksgiving 1906 the first train rolled into Monarch, and the rails never extended farther. There was daily service, and local ranchers could flag a ride or have their packages dropped off. There were no cattle guards, so the fireman would step off the locomotive, open a ranch gate, and close the gate and hop back on after the train passed through.

During the winter of 1905-06 a box factory was started.   It operated briefly before it was destroyed by fire in the fall of 1908. The fire forced the mill and railroad into receivership. Visitors, particularly former stockholders, helped themselves to equipment and entire buildings, but Monarch’s core was preserved and developed by Harry L. Dierks of Kansas City into KaRose. This summer resort was named in honor of Dierks’ daughter Katharine Rose.  Other Monarch buildings went to neighboring dude ranches and the bowling alley went to Granby.

To hold the railroad right-of-way, Ernest Behr restored the locomotive in 1912 to carry parties of fishermen along the river from one pool to another.  Ed McDonald, a dude rancher, ran a Cadillac touring car on flanged wheels on the rails to carry mail, supplies, and passengers to the valley ranches. Just before World War I the engine and rails were sold for scrap.

Frank H. Wolcott wrote, “In September 1954 my wife and I drove over the site to discover any signs of Monarch or the railroad…It gave us a queer feeling to realize that substantial things like railroads and buildings that we helped build have vanished.  Was it all a dream?”