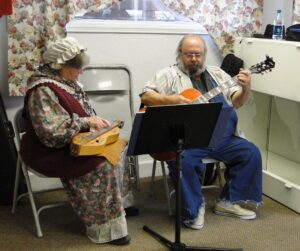 Ronda Kolinski portrayed Grace Eslick and spoke to the group 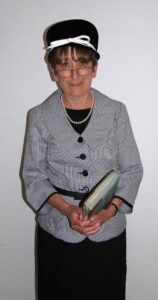 A visit from Grace Eslick

President Jim Cervenka welcomed the audience and explained that the evening program was about the presentation of ideas for the Smith Eslick Cottage Camp with feedback from the audience. The Historical Society wants to make this site both important for Grand Lake history and heritage, for interpreting Grand Lake itself and something that the community will want to enjoy. Jim reviewed some of the recent Cottage Camp successes: installation of a restored roof on the Cottage Court structure with the support of the Grand Foundation, upcoming excavation and construction of a permanent foundation for the Cottage Court with support from the State Historic Fund, Grand County BOCC and the Town of Grand Lake, and master planning for the entire Cottage Camp site. This project has been funded in part by a grant from the Hart Family Fund for Small Towns and the National Trust for Historic Preservation as well as matches from the Grand Foundation and generous donors. 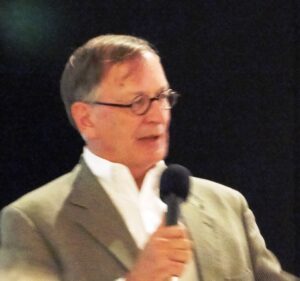 Preservation Architect Dennis Humphries of Humphries Poli Architects has been collaborating with the Cottage Camp Planning Committee to develop a master plan for the Smith Eslick Cottage Camp. He reviewed the Cottage Camp with a PowerPoint program, discussing the present location of the court, its history as a business and possible plans for the site. He encouraged those present to contribute their ideas and to discuss what they hear about the project tonight with others. He asked the audience members present to write their opinions, additional ideas and responses to ideas he presented on post-it notes and place them on posters located around the room 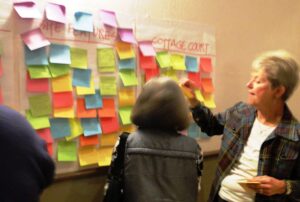 Comments from the audience

In order to enlarge the site, a second lot has been offered at a lower price and people were encouraged to donate funds for the purchase of the second lot.ed that he is working to obtain a Model A automobile for the Cottage Camp. He explained the work of the Heritage Coalition in Grand County and listed ways we can participate in the organization. Some board members are able to attend meetings by Skype internet connections and board business can be conducted via 3-mail. Jim encouraged everyone to consider joining the GLAHS Board of Directors. All board meetings are open to the public and are held on the second Wednesday of each month at the modular office building, 610 Center Drive, across from the car wash in Grand Lake at 7:00 pm.

Nominating Committee Chair Lois Sauer read the slate of present members of the Board of Directors nominated to serve a three year term ending June 2017. Nominations were Elin Capps, Patti Stahl and Lois Sauer to continue on the board and Frank Reardon, Travis Appelhans and Steve Batty to fill open seats. Lois asked for nominations from the floor, none received. It was moved and seconded that we accept these nominations. Motion passed.

Lois asked for nominations for President of the Board. Jim Cervenka was nominated and elected. Nominations for Vice President – Kathy Means, Treasurer – Patti Stahl and Secretary – Elin Capps were accepted. Minutes of the 2013 Annual Meeting were accepted as present.
Meeting adjourned.