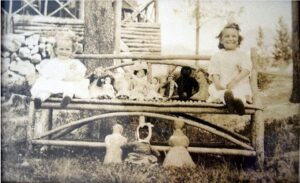 Ruth and Rosemary Kauffman with their dolls

Rosemary Kauffman Wilkin grew up in the Kauffman House in Grand Lake, Colorado.  She was the second daughter of Ezra and Belle Kauffman.  Rosemary enjoyed dolls as a child.  Some of the dolls she played with at the hotel are displayed in the main bedroom.  Rosemary made clothing for her dolls.  One dress was from silk brought to her from Japan in 1945 and another was made from her bedroom drapes.  Even if a doll was broken, she continued to love and preserve it after all these years.  The dolls were displayed throughout her home in Wheatridge, Colorado.  Many were gifts from friends and date from the 1970s and 1980s.  Each doll was named by Rosemary – not always the same as the manufacturer’s name.

A few of the dolls on display

Click here for pictures of each of the dolls.