His father, who had emigrated from Germany as a child of six, had spent most of his time in Cleveland, although at one time he was postmaster in St. Paul, Minnesota in the 1850s.  At the time of Everett’s birth, Mr. Harmon was in St. Louis furnishing doors and windows for the Southern Planters Hotel from his planing mill.

With the outbreak of the Civil War the following year, the Harmons moved to Fort Defiance, Ohio.  Back in Cleveland after the war, Mr. Harmon went into the oil refining business.  At that time Rockefeller was forming his Standard Oil Syndicate; and because Mr. Harmon insisted on a cash settlement for his plant rather than stock in the new company, he earned the enmity of Mr. Rockefeller.

But Mr. Harmon’s health was failing, so on the advice of his physician, he and his family came to Colorado in 1872.  The two boys, Jule and Everett became interested in mining, particularly in assaying.  However, their father’s health did not improve and he finally went to New Orleans and there he died in 1877. 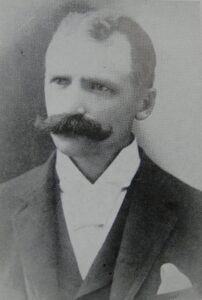 In St. Louis, in 1860, was born Everett M. Harmon, one of Middle Park’s earliest pioneers.  Born of German parentage, Everett inherited from them a rugged constitution and his love of hunting and the great outdoors.

Everett stayed in New Orleans for about a year, then his brother Jule, who had remained in Colorado, went for him.  Jule had a job as assayer in the Caribou mine at Nederland and wanted Everett to assist him.

It was at the Caribou that the Harmon boys met Emmett Mann, who persuaded them to spend the winter on his ranch on the Grand River in Middle Park.  And so it was that Everett Harmon first saw this country in the fall of 1878 when a boy of not quite eighteen.  The hunting and fishing was all that Mann had promised, so the boys looked forward to a pleasant winter.  To Everett, as the youngest, fell the job of camp cook.  This however, was not as bad as it sounded.

In the fall, John Spencer and Bill McQueary drove to Georgetown for provisions.  Harmons and Mr. Mann gave them $125 with which to buy their provisions.  After a long absence, the two returned with 500 lbs. of flour, some salt pork, a little sugar, and a small amount of coffee.  They promised to make another trip after the rest but wanted to take out a load of game for the market.  So in order to help the good work along, and because they were anxious to get the rest of their goods, the Harmons and Mr. Mann killed around forty rabbits for Spencer and McQueary.  But somehow they never got around to making the trip, so Everett’s menus for the winter consisted of salt pork, grouse or rabbit, sourdough biscuits and flour gravy.

In the spring, Everett went back to work in the mines at Nederland.  But shortly he was back in the town of Hot Sulphur Springs working for Mr. Hook as assayer and clerk in his general store.  He slept on the pool table using the blankets from the shelves for covering.  His degree of comfort fluctuated with the sale of blankets, and if buying was brisk Everett spent a cold night.  On one occasion he was reduced to the cover on the table.

It was in 1879 that Everett came to Grand Lake, for the mines above the Lake at Lulu and Gaskill were booming.  He and his brother became interested in the Hidden Treasure Mines and Everett did assay work for the whole mining district.  The richest assay he ever made was from ore from the Grand Lake Mine, it ran eighteen thousand ounces of horn silver.

The Harmon homestead at the east end of the Lake was filed on in 1888 by Mr. Harmon’s mother and remained continuously in the Harmon family until it was sold to the government for a reclamation project in 1939.

In 1896 Everett Harmon married Jessie G. Lander.  Mrs. Harmon was born in Harrow, England and came to this country when a child of thirteen.  When Everett and his lovely young bride came to Grand Lake in the spring, they brought with them the first bicycles that had come into the lake.  They brought them in on the stagecoach over Berthoud Pass, riding them part of the way.

Two daughters, Conuela and Patricia, were born to Everett and Jessie Harmon and both girls spent a good part of their childhood on the Harmon homestead.

Everett Harmon held many public offices during the early years of his long residence in Grand County.  Some of these offices were:  Postmaster at Grand Lake, Clerk of the District Court, under sheriff, and many others.

Of all those hardy pioneers who came and went, Everett Harmon remains the only one living here now.  Mr. Harmon has seen many years and many people come and go since first he saw Grand Lake: some quietly drifted away while others have found their last long resting place.  He is not the young man that once he was, but by the sparkle in his blue eyes, and the subdued excitement in his gentle voice, he makes the old scenes live anew.  From a memory so perfect that even the most minute detail is not forgotten, he pictures events so clearly that the listener experiences them too.  He loves to tell of the days when Middle Park was a sparsely settled wilderness, abounding in game and fish; when people lived farther apart but were closer together in spirit.

All gratitude and homage to Mr. Harmon and those other rugged pioneers who struggled with the hardships of yesterday that we might have the comforts of today!

Copied from a 1940 scrapbook donated to the Grand Lake Area Historical Society.  Ruth Meyers was Ruth Kauffman, daughter of Ezra and Belle Kauffman 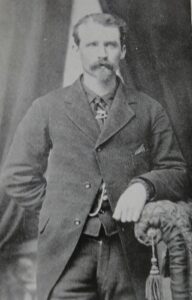 In writing about Jules Harmon, one cannot but wonder what great and good things he might have done if he had been allowed to live a normal life span, for in the short time allotted him he did much and showed great promise.  His vivid personality and kindliness, together with his talent for making friends easily, made him beloved by all who knew him.  The men who worked with him fairly worshipped young Jules Harmon.

The elder of the two Harmons, Jules was born in Cleveland in 1852.  An active outdoor boy, he at one time was Amateur Champion of Fancy Ice Skating in the state of Ohio.

He taught himself short hand and became very proficient at it as a cub reporter for the Rocky Mountain News in Denver.  He eventually worked up to assistant editor.

However, assay work in the mines interested him most and so he turned to that, taking a job as assayer in the Caribou Mines at Nederland.  From there he and his young brother journeyed into Middle Park, spending the winter with Emmett Mann.  When spring came, Jules went to work as deputy assayer under Mr. Ostrander.

At the election the following fall, Jules was elected county clerk and while holding that office he was also appointed deputy treasurer.  In 1881, while Jules was county clerk, he had the first survey made of this township.  Because of the growth in population he felt that this was necessary.  At that time there were 400 people at Lulu alone to say nothing of the rest of the district.  The survey was made by Ouellette.

Jules became interested in The Hidden Treasure mines and bought stock in the company.  In 1882 the mining company was reorganized and Jules was made Superintendent of the mines.

This was the finale of his career, for in December 1882, a sudden snow slide buried him as he strove to cut a new trail from the cabin to the mine tunnel.  His men stood by helplessly, aghast at the tragedy.  As soon as possible, they dug frantically for the body, but it wasn’t until the following spring that he was found at the bottom of the ravine where the slide had carried him.  And there he was buried beside the work he enjoyed, in the mountains that he loved.

Copied from a 1940 scrapbook donated to the Grand Lake Area Historical Society.  Ruth Meyers was the daughter of Ezra and Belle Kauffman.