History of the Pine Cone Inn

The Ish family came to Grand Lake in the fall of 1913. Lapsley Ish had been a miner during the gold rush days at Teller City. He had then laid out the town of Rand on his homestead. He built and operated the Rand Hotel. It was later sold to Bailey and Dolly Leatherman. The building is still in use today as the Rand Store. Lapsley (Laps) and his wife Alice (Shearer) then moved to Grand Lake and built the Grand Rapids Hotel. They had two sons. Lesley moved to California and while there married Goldie Thomas. Lap’s second son Guy died in 1917 from pneumonia while in the Army. Lesley returned home to be with his parents. In 1919, Lesley and Goldie bought the Grand Lake House which was built in 1878 by Wilson Waldron who had laid out the present town site of Grand Lake. Mr. Waldron had left town rather suddenly. He fled after having killed a man. The Grand Lake House had stood empty until Lesley and Goldie purchased it and built the original Pine Cone Inn. They ran the Inn together until Lesley’s death. He died in a car accident near Greeley. Goldie stayed on and operated the Inn with the help of her children. Jack and Bob joined the army at the beginning of the Second World War. Patricia married Mike Tilton, who had moved to Grand Lake to work on the water diversion project which took water from Grand Lake to the eastern slopes.

The original Pine Cone Inn burned in September of 1943.  Goldie had left the Inn and traveled to Denver to be with her daughter Patricia and husband Mike Tilton. Two days later Goldie received a call telling her of the fire. Everything was lost. The cause was never determined. Goldie, Mike and Patricia returned to Grand Lake in the early spring to build and begin again. There was an urgency as the liquor license held by the Pine Cone would run out if not soon in operation. Mike, with the assistance of his father began clearing the rubble and thawing the ground to install a cistern and footings. Mike had designed the round room and began on the first stage of the new Pine Cone Inn. The Wescott’s built the fireplace to Mike’s specifications. He worked side by side with his wife, mother-in-law and his father, Bert Tilton. They completed the round room of the Pine Cone Inn. The music played and people again danced – ten cents a dance. Patti and her mother made sandwiches to sell as the liquor license stated that food had to be served. Patti sold the dance tickets. And the music played. The following year the rest of the Pine Cone was built. There was the main dance floor, the kitchen, family living quarters and guest rooms upstairs.

Money and supplies were scarce but with Goldie’s ingenuity and Mike’s determination, used hardwood flooring for the dance floor was acquired as well as the other materials that were needed. What they couldn’t buy they built. Goldie hired first rate staff. The chef was renown. The small menu included steak, chicken and trout accompanied with fresh salads. Everything was cooked to perfection. Waiters were trained by Goldie. There were no wasted steps. Business resumed as usual. Bands were hired and they again played six nights a week to full houses.

The Ish/Tilton family left Grand Lake in 1952 but their roots remain there, deep and strong. 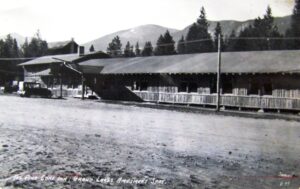 The proposed development at the southwest corner of Grand and Hancock has brought attention to one of the most historic sites in Grand Lake. Before the town was platted, there was a large two story building here. The Grand Lake House, built by Wilson Waldron in 1878 was one of the first eight buildings around the lake, and the birthplace of Grand Lake’s first child, Roy Waldron, in 1880. Waldron was an active figure in the growing community, was instrumental in laying out Grand Lake, was a County Commissioner, and found his demise in the heat of drunken passion after a festive New Year’s Eve party at the Grand Lake House in 1883 when he shot a well-liked fellow townsman, Robert Plummer. Plummer had been asked by Waldron’s wife, Eleanor, to distract Waldron from pestering her and her newborn child. After an assault by Waldron, Plummer left the party and was shot in the back as he crossed the street. Waldron was jailed, escaped and laid low until his death in 1897. Mrs. Waldron took her family to Denver and the Grand Lake House was abandoned.

It was purchased in 1919 by Lesley and Goldie Ish, the son and daughter-in-law of Laps Ish, developer of the Rand area. The Ishes demolished the old Grand Lake House and built the original Pine Cone Inn. Grand Lake during prohibition was both a popular destination for entertainment and a remote location for law enforcement. The Pine Cone was the center of Grand County’s social scene. From the 1920s through the 1940s, families came for the music and dancing, and the bar offered both liquor and ice cream. Lesley died in a car accident near Greeley, but Goldie stayed on and operated the Inn with her three children. Her two sons left to join the army at the beginning of World War II. Goldie’s daughter, Patricia, and her husband, Mike Tilton, remained.

The original Pine Cone Inn burned to the ground in September, 1943; the cause was undetermined. The following spring Goldie, Patricia and Mike returned to Grand Lake to rebuild. Mike designed the famous Round Room that became the Wagon Wheel Bar. To keep their liquor license, they had to build quickly. Soon there was liquor, dancing and sandwiches. The following year the construction was completed, including a kitchen, family living quarters and guest rooms upstairs. Business was in full swing, with excellent food and bands playing six nights a week to full houses.

The Ish/Tilton family left Grand Lake in 1952. From then until the 1980s the property changed hands several times and was known as Voltaire’s, Little Bear, and The Pine Cone Theater. It was demolished, except for the Round Room, in the mid 1980s to make way for George Pierce’s development, the New Pine Cone Inn. The plans included keeping the Round building, and adding a three story building next door and two more behind facing the beach on Lake Avenue. Included were condominiums, a theatre, conference center, two restaurants and a lounge, shops, an indoor pool and indoor parking. These plans evaporated, partly due to the infrastructure costs. Since then the site has seen a t-shirt shop, a maze and Poncho and Lefty’s restaurant. As development plans are in motion once again, it will be interesting to see how the next chapter in the story of Grand Lake’s oldest corner continues.