An article in the newspaper of February 1933 headlined: “Woman’s Club of Lake will Sponsor Library”

Mrs. E. L. Harsh, president of the Grand Lake Woman’s Club, presided over the business meeting. The club voted to sponsor a town library, and it was hoped that a sufficient number of books may be obtained to open the library next October.

“The Grand Lake Woman’s Club is glad to announce that its free public library is now open to the public at the home of Mrs. Goldie Hawkins. Books may be exchanged every Thursday from 10 a.m. to 5 p.m. There are over 300 volumes of fiction and non-fiction for both adults and children.”

“The club is grateful to many of our citizens as well as to summer residents who have donated these books. It is by means of their generosity that our library is made possible at this time. Lumber for the book shelves was donated by Henry Schnoor, and Preston Hawkins built the shelves without charge.”

The Juniper Women’s Club, a junior club of the Grand Lake Women’s Club first opened a library in January 1945 in a small room in the Community house used for town council meetings. They were allowed to use this room rent free; however, soon found themselves bursting out at the seams unable to take book donations due to lack of space.

When the town council and the firemen decided to build an addition on the firehouse in the winter of 1947, the Juniper Club sought and received permission to have an upstairs room 16 by 18 feet for the library, the one condition being to finish the room themselves.

A contract was let for complete finishing of the room with set in book shelves in the east and west walls and a sub floor. A wiring contract was also let. To earn enough money to finish payment the club had bingo, potluck suppers, card parties and food in a basket.

Since January 1945, 836 books were added to the 900 borrowed from the former library which had ceased to function several years before.

In February 1948 the books were moved by hand through the snow with the assistance of the club members’ husbands.

In the summer of 1948 these books were all classified by the club members according to the Dewey Decimal System. 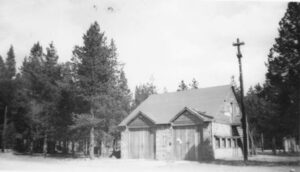 “In May a benefit card party was held and $34 was cleared for the library. Two baskets of food were sent from member to member and $26.25 was raised this way.

“In July a silver tea was given at the library room. A lovely program of music, pictures of Hawaii, etc. was given. $50.75 was cleared from this tea for the library.”

“During August the club women sold chances on a service for six, sterling silverware set. 330 chances were sold earning $229.73 for the running of the library.”

“In addition to the 50 books purchased, an oil stove was purchased, curtains were made and the floors were refinished for the library by club members.”

From the newspaper articles of 1949:

“The library boasts 1650 volumes, most of them good recent books, and it is open two afternoons a week in winter but three in summer with Mrs. Agnes Gingery as librarian. This year’s project for the Juniper Club under the direction of Mrs. Grace Eslick, president, will be the landscaping of the area within the circle drive around the fire house in the Community House block. 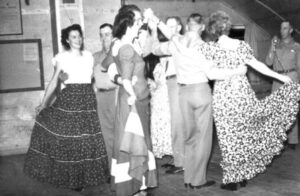 “Last Sunday the first of a series of square dances was held at the Southway lodge, with a good crowd attending. These dances are put on by the Juniper club and will be for the benefit of the Grand Lake library. They will be held every Sunday night and refreshments are served free. If you do not know how to square dance and would like to learn, we will be glad to teach you.”

“On the 26th the Juniper Club held a square dance in the new hall at Southway’s Lodge. There has been a new floor laid and room is available for 5 squares at one time.”

“The square dances at Southway’s on Sunday evenings are proving very popular as well as lucrative for the library fund.”

During the Christmas holidays the new floor was laid and new shelves were built. Material and labor cost $150 of the club’s square dance money.

The Juniper Club then started a beautification program in the area of the town square and around the fire house and library.

The Juniper Library at Grand Lake became a branch of the Grand County Library System in 1988.

In May of 1995 the Library moved from the Fire Station to its present location.

With increased library use and development of computer information systems the need for a larger space has been recognized. With the new fire station completed in Grand Lake, plans are underway to build a new library on the location of the old fire station.

December 13, 2003, a 70th birthday party was held at the Community Center for the library in recognition of the many years of service to the Grand Lake Community.

In May of 2006 a brand new library was dedicated and opened to the public in Grand Lake.