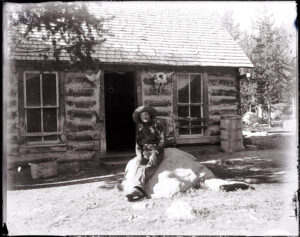 In the late 1850s they came, young and old, bitten by the bug of Pikes Peak fever, yearning to find their fortune in the mineral rich hills of this Kansas Territory called Colorado. Some succeeded, other saw the Elephant and headed home, but many remained to follow the callings whispered to them by this isolated and pristine wilderness. One of these adventurers was Joseph Lean Wescott.

After surviving his bout of Colorado gold fever Wescott enlisted with Company G of the 1st Colorado Volunteers. This little company of men would clash head on with the Confederate Army at Glorieta Pass, stopping the Confederate incursion into New Mexico and thus turning the tide of the war in the far west. It was during the New Mexico campaign that our J.L. Wescott would contract a dismal case of rheumatism.

In 1865, after the War was over, many soldiers headed west by foot and on horseback. Wescott returned over Caribou Pass swinging and slipping, riding in a hammock between two mules, searching for a cure to his agonizing rheumatism. His pain led him on a five day trip to Hot Sulphur Springs and the healing waters of the mineral springs. Here he would stay and eventually stake a claim for the 160 acres surrounding the springs. Misfortune would rear its ugly head in the name of one Susan Boshman. She, aided by others, would swindle Wescott out of his beloved Hot Sulphur property. With that, he headed to Grand Lake where he would become the area’s first serious white settler. The year was 1867, and Wescott would meet a lone Indian camped on the shore of Grand Lake. This brave would convey a tale and Wescott, using his flair for creative writing, would turn this legend into his famous poem “The Legend of Grand Lake”. His misfortune was not over. Wescott was betrayed once again by a young fellow who spent the summer with him. At the end of the season the visitor took a large catch of trout and Wescott’s burros to Georgetown, promising to sell the fish and return with supplies for the winter. Houseguest and burros were never seen again, and the snows set in. Judge Wescott survived the winter by roasting a buffalo robe and making a stew from his moccasins and a leather chair seat.

Like many a veteran of that era Wescott would settle into these mountains where he hunted and fished, drank too much, befriended the natives and shot a few, never speaking of his past or his age and never taking a wife. But unlike many an early settler to this region, Wescott stayed, built a few cabins, became friends with the Proctor family, watched in 1876 as Colorado shed its Territorial cloak to become a state, became Grand Lake’s first postmaster in 1877 and platted Grand Lake City in 1888.

The old Judge died in 1914 leaving Grand Lake history with one of its most colorful characters and a written legacy in The Legend of Grand Lake. As for the “Judge” part, there is no evidence he was anything but self appointed.