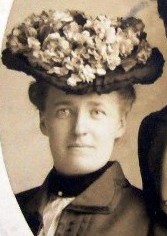 Clara was the first wife of Ezra H. Kauffman. They married 13 Oct 1888 and had two children, Mary Amanda born 3 Jul 1889 and Henry Carlton (Carl) born 18 Jul 1890, both in Hot Sulphur Springs, Colorado. In 1891 they moved to Grand Lake where they built a hotel, The Kauffman House. However, life in Grand County must have been too hard for Clara plus life with Ezra may have been too hard too because she left him in 1900 and moved with the children to Golden, Colorado. In 1900 they were living on 3rd Street and Clara was the landlady of a boarding house. On the census form she is listed as widowed which must have been better than divorced.

Clara was the daughter of John Johnston/Johnson who was born in New York as was Clara. John, her father, came to the west to mine.

Clara’s children by Ezra continued to live in Colorado. The oldest, Mary, married Ralph Dawson (1883-1936) from Great Bend, Kansas. In 1920 they were living at 1534 Logan St. Denver, not too far from where her mother lived. Ralph was a merchant working on commission. They had no children. In 1930 they were living at 1508 E. 8th Ave. in Denver, rented a home, had a radio, he was married at age 29, Mary at 25 and Ralph was a proprietor of a wholesale produce establishment. No children. Mary died in May 1971.

Henry C. Kauffman died 11 October 1975 in Colorado. He never married. He served in WWI and on the Registration Card of 1917 he was living at 1823 S. Grant in Denver and was 26 yrs. old. He was a teamster for E.W. Robinson located at West Iowa and Cherokee, was 5’7’’, brown hair and eyes and had no physical defects. After the war he continued to live with his mother and stepfather.

I was born Nov 25, 1873 in Minneville, NY near Lake Champlain. I came out to Colorado with my father because he was a miner. We went first to Black Hawk and Silver Plume, and then to Hot Sulphur where I met Ezra Kauffman who was running a saloon. I was almost 15 when we married and he was 39, but in those days marriage was for convenience more than love.

Ezra started building the hotel in Grand Lake and we moved into an abandoned hotel on main street. People told me it was haunted because of an early murder.

We moved into the Kauffman House in June of 1892 when Ezra left me to run the hotel and take care of the children while he was free to be gone for lengths of time hunting, mining, trapping, guiding and fishing.

I remarried in 1904 to Harry Monfort of the Packinghouse Monforts in Greeley and lived to a ripe old age of 92. My son Carl often came back to visit his dad and kept in touch with his sisters. Mary married Ralph Dawson and also visited her father.