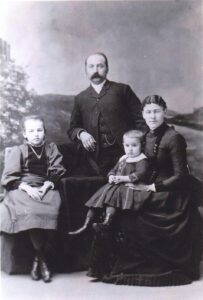 George Carr came to Grand Lake on September 1, 1899 for the benefit of his wife’s health.  He acquired land about three miles below Grand Lake and from it built up one of the best Ranches in that vicinity.   During his residence in Grand County he served as Republican Precinct committeeman for many years and was elected Justice of the peace for several terms.  For a number of years he was an able and efficient member of the school board of the Grand Lake district.

Ethel and Harry were both accomplished musicians, Ethel on the piano and Harry on the violin.