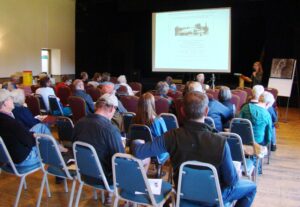 Vice-President Kathy Means welcomed the attendees. She explained that President Jim Cervenka was away, and thanked the attendees for coming despite the road work which made it more difficult to get into Town. 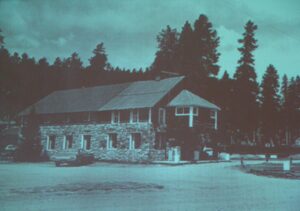 Vice-President Means introduced presenter Nancy Zoller and her husband Bill. Nancy explained that she and her Kovach family were recruited in Phoenix, AZ to work at the El Navajo Lodge in Grand Lake in early 1963. At that time the Lodge was owned by Ecil and Evelyn Scott, who purchased and enlarged the property beginning in 1957. Nancy, her sister Sharon and brother Larry, worked alongside her parents as they managed the Lodge business. Nancy talked about how very important those summers were for her, as she grew up hiking, horseback riding, boating, fishing, and generally enjoying her surroundings. She met her future husband in Grand Lake. Elaine and Joseph Kovach purchased the property in 1976, and added a bathhouse, tent area, trailer park, and trailer spaces to the already existing two-story Lodge, five cabins and seven row motel units. The entire Lodge property was torn down in 1982, and has been replaced by the Shadow Mountain Yacht Club Condos.

After intermission, Vice-President Kathy Means opened the Annual Meeting. She indicated that the minutes of the June 8, 2016 Annual Meeting, as well as the President’s message, were attached to Members’ Annual Report. Nominations to the Board of Directors: Elin Capps, Frank Reardon, and Patti Stahl have agreed to remain for another three year term on the board. There were no nominations from the floor. Dave Lively moved, Steve Batty seconded, all agreed to the election of Elin, Frank and Patti to the Board. Kathy explained that the president is not a member of the board, but is elected annually. Jim Cervenka has been nominated; there were no additional nominations from the floor. Elin moved, Steve seconded, all agreed to the election of Jim Cervenka as President.

Vice-President Means again thanked the Members for their attendance.