Alexander Phimister (FIM-ih-stir) Proctor was born in Canada on September 27,1860. The first time Phimister came to Grand Lake was in 1875 with his brother George. At the age of 16 he shot and killed both an elk and bear in one day.

The Proctor family came to Grand Lake in 1877. They were the first family to live year round in Grand Lake. Phimister later studied art and sculpture in New York and Paris.

Recognized as the “sculptor in buckskin,” Proctor was known for creating important western and wildlife sculptures throughout the first half of the 1900s.

The inspiration for many of his sculptures, monuments, and small bronzes came from studying wildlife and living in the west.
“The Buckaroo” and “On the Warpath” monuments are both in Denver Civic Center. 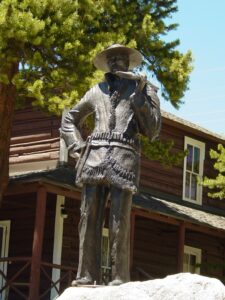 A statue sculpted by Howard Neville is located on Grand Lake town property in front of the Kauffman House museum.