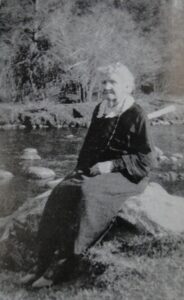 Louisa Jane was a little woman with a lot of energy, living to be 101 yrs old. She was born in Virginia on February 16, 1839. Louisa married Francis Spray when she was 18 and they had a daughter, Fanny, born in 1861 before he died of TB in 1864 during the Civil War. After Francis died Louisa moved with her parents, John and Phoebe Spurgeon to Kansas. Fannie married Fred Quincy in 1883 and remained in Kansas where she had two daughters, Lucia and Nina. Fred was a banker in Salina, Kansas. While in Kansas, Louisa married Alexander Adams and had another daughter, Jessie Love, who was born in about 1876.

In 1880 Alexander and Louisa migrated to Colorado. They started their journey in August, enduring the heat of the plains but when they reached Berthoud Pass in the middle of September, a snow storm came and caused the death of 400 of the 500 head of cattle they had driven from Kansas.

Alex and Louisa arrived in the Grand Lake area during the gold rush fever. They bought a farm south of Grand Lake which is now under Lake Granby, and in 1888 they bought the Garrison house on the west side of Grand Lake. They enlarged it to two stories, refurnished it, and renamed it 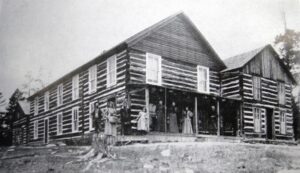 the Grandview and a grand view it was!  Louisa decorated the hotel with lovely furniture and rugs. Unfortunately the hotel caught fire in the dead of winter in 1901. The lake was frozen so that water was not available to put out the fire and little was salvaged. After the fire Louisa leased the Kauffman house and operated it for awhile.  The two daughters grew up in Kansas with the grandparents.

Louisa’s daughter, Jessie Love, was married in Grand Lake to Benjamin Mitchell who was a fiddler, farmer and 13 yrs older than Jessie. His farm was of 160 acres above Grand Lake. Louisa didn’t approve of the marriage and refused to accept him therefore alienating her daughter who eventually left Grand Lake, Benjamin and her three children, Rennie Aaron, Myrtle Lucy and John Alexander.   Benjamin accidently killed a man and was sent to prison.